Anew At Home: A Review 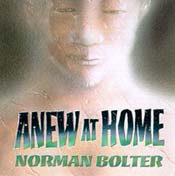 Norman Bolter, in his new solo recording, has offered our time something far more than just "another" excellent trombone disc. Rather, he has raised the bar for players and listeners alike by creating a unique, challenging and stimulating listening experience.

As a trombonist, Norman Bolter's credentials are well known: he has been member of the Boston Symphony Orchestra since 1975, is Principal trombone of the Boston Pops Orchestra, serves on the faculty at New England Conservatory of Music (during 1998-99, while on sabbatical from the BSO, he is interim Professor of Trombone at the University of South Florida in Tampa, FL), and is a former member of the Empire Brass Quintet during the time when they won the prestigious Naumberg Chamber Music Prize. In recent years, however, Bolter has turned his attention in a serious way to composition and has written, in a remarkable expression of inspiration, over 40 works for various combinations of instruments, most including trombone.

In addition to all this he has begun, in conjunction with his wife, Dr. Carol Viera, to explore the "why" of music - indeed its very essence - and together they have worked to create performing and listening environments which can make the experience of music a very deep and meaningful one. Their concept of "essence music," and in particular their work with their "Frequency Band" ensembles, is one that strikes a resonating chord among those who wish to remove music from the noisy competition of our whirlwind, 6000 channel universe. Time, space and a properly tuned inner-self are hallmarks of Bolter and Viera's created musical experiences.

It is within this framework that Anew at Home has been offered. Here is a recording which consists entirely of music of a single composer - Norman Bolter - which is performed expertly by its creator. This in itself is a ground breaking achievement. From the first sounds of the CD - a shattering rimshot on snare drum in Dances of Greeting, followed by the delicacy of finger cymbals, Anew at Home rivets the listener's attention.

The 14 compositions cover a wide range of instrumentation and character - trombone with percussion, with piano, with harp, and unaccompanied. What is particularly striking is that there is no "absolute" music on the album, rather, each work is informed by either a life experience or the mind's fertile and fervent imagining and imaging. This characteristic of Bolter's music - that it is reflective of events and thoughts that can strike deeply into the deepest emotional fabric of the performer and listener - is what is so appealing about the recording. The album is not, in the words of the liner notes, "about academic, technical or technological perfection, pre-occupation with which can and often does lead to the music's being stripped of its sentiment and essence life. The aim instead is to allow the freest possible essence expression as a means to uplift, inspire and cause benefit to those listening."

Anew at Home does all that and more. Norman Bolter's playing is simply a model of fluidity, beauty and trombone mastery. Yet his blistering technique, stunning range and expressive involvement never occurs for its own sake. What his playing does is allow the listener to truly experience the character of his compositions, whether one be transported to the dreamy, undulating suppleness of Lakes enter into the realm of deep thought in Timeline Contemplations, be affirmed by Approaching the First Gate or, take a ride on The Red Scooter.

While each listener will no doubt be stuck with personal "favorites," the truth is that as this writer has listened to the album, each hearing brings something new, a fresh revelation, an unexpected resonance of a personal "touchpoint" that leaves an ever new, lasting impression.

It is also refreshing to see a trombonist create an album that not only goes below the surface of what we have come so often to expect (how many recordings do we see of the "same old thing," made available so we can simply say "wow" over good technique?), but which builds a whole new foundation and creates an impressive model of what an album can be. Norman Bolter's music requires us to think, and along with his wife, they have set out to impact us in unexpected ways. This is very refreshing, inspiring, and noble as well. Through Carol Viera's company, Air-ev Productions, their activities include recordings, composition and publishing of music as well as masterclasses, published texts and "Frequency Band" encounters and concerts.

Paul Hindemith's poem, The Posthorn, concludes with these words which were never more apropos than in considering Anew at Home:

Your task it is, amid confusion, rush, and noise
to grasp the lasting, calm and meaningful,
and finding it anew, to hold and treasure it.

Let us look forward to seeing more from Norman Bolter and Carol Viera as they have shown us something very special to treasure indeed. Obtain this album, listen, reflect, and then, go and do likewise.