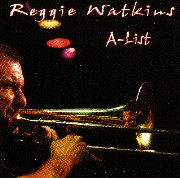 It was a pleasure to hear and review this fine freshman production effort by virtuoso trombonist Reggie Watkins, a musician with a full arsenal of tools at his disposal: an extensive (but not overly used) range, beautiful tone, terrific melodic concepts and excellent compositional and arranging chops. Even more impressive is his ability to compile a diverse and compelling set of works, produced on the fly over a short 3 day recording schedule, made even more challenging by the level of difficulty of these works. Thankfully, his fellow musicians made the process seemingly effortless, and one could tell that this was truly a team effort under Watkins' leadership. It's great to hear Patrick Hession's fine lead playing again for the first time since our summer at Disney World just a few years back. The production team, highly praised by Watkins in the liner notes, was equally deserving of such, but I'm sure they appreciated the quality of the original material.

The mix of music, melodies and instrumentation is fresh, and upon continued listening, increasingly enjoyable, not necessarily to imply an acquired taste. The selections include everything from early '60s styled big band bebop to current instrumental pop grooves, a couple of passionate vocals featuring Eugene "Eugenious" Stovall and also some great Latin jazz for good measure.

The disc commences with a fairly commercial funk tune entitled Three Girls on Two Chairs, a curious heading (and I suppose there may be a related joke) which grabs your attention as does the punctuated intro giving way to a nicely balanced melody, countermelodies in the bone and tenor sax and wa-wa guitar bridge. The signature Maynard sound is certainly present to include descending chromaticism in the chord structure and of course a killer high "C" in the interlude preceding the lovely Rhodes piano and slightly plungered trumpet solo. Some nice layering action takes you back to the head, followed by some trumpet and keyboard interplay as the tune fades. There may be some potential here for airplay in the "smooth jazz" format.

All Blues comes to mind with the next track, Weight for Six, and the now scaled down combo ensemble and soloists all make the most of the comfortable groove laid out by the rhythm section. Very nice blend in the front line of trumpet, trombone and tenor with solos in that order. Jamie Moore's trumpet solo stands out in particular in this selection with some extremely fluid lines, a little outside here and there but back inside in time for some metric modulation and a Scrapple from the Apple quote, a tune also in the key of G, so it works out well idiomatically and musically. Watkins lends his fine solo to the track starting with a heralded entry and with a few musical nods to the late JJ Johnson and also a little Steve Turre. Bassist Nathan Peck provides a nimble approach to his solo prior to the front line's return, climaxing with Watkins' very solid high "F#" at the end.

The tenor soloist on the next track, You Don't Know What Love Is superbly arranged by Paul Armstrong, demonstrates a solid understanding of Michael Brecker's musical palette to include tone quality, vocabulary and special effects. This track features for the first time some fine flute work by Eric Defade in combination with a solo trumpeter (it's not clear whom), beginning the trombone solo section which is also peppered with some hints at a Latin groove especially in the bridge. The unison shout chorus toward the end is inventive, well-played and appealing to the ear.

The subtle and at times mysterious Molero seems to take the listener on a journey to the Caribbean, complete with reggae stylings seemingly portraying banana boats en route to some distant and misty port of call. Beware, however, the encircling sharks in the darkest depths of the ocean possibly suggested by the mysterious horn voicings in the mid-section of the tune. Very impressive was the way in which keyboardist Howard Alexander splashed color and supple textures in support of the ensemble. This shows what a marvelous musician he is, further revealed by his solo work later in the tune, prior to the excellent drum solo by James Johnson III.

Eugene Stovall is on his way to being a major influence in the jazz world and Watkins was wise to select him for his two contributions. He is still a developing artist, at least in comparison with some of the greats and his lyrics could be less pedestrian, but I'm certain, having been accused of the same, these are lyrics that come from the heart, not to impress others, but to express his true inner feelings as evidenced by his highly emotional approach to both songs, Sittin' Here in My Room (track 5) and December Twentieth (track 7). The first of these features Stovall as an angry and blue young man, rather similar to, but not nearly as expressive as, the second. Also dissimilar are the skills displayed in the two tracks, the first of which features Stovall's Hip-Hop like vocal percussion (or VP in the vocal world) and scat effects, and the second of which features his extensive range - low F to excruciatingly high B, matched beautifully and effectively by the wailing guitar of Craig "Izzy" Arlet. Watkins turns in nice trombone background and provides excellent arranging for Sittin' Here In My Room and also composition for December Twentieth, possibly pushing the limits of Stovall's capabilities. I hear many other great things to come from this collaborative team.

Turning back to track 6, we hear Mike Dubanewicz's arrangement of Whisper Not, a demanding arrangement superbly performed by the larger instrumentation on this album and featuring the alto sax of Rick Matt and also Watkins. With hints at Hefti, the tune carries forth with a nice "Odd Couple" feel following a warm chorale introduction. Perhaps more indicative of the style is the direct quote in this tune from Groovin' Hard, the well-known Don Menza big band composition. The trumpets feature some beautiful harmon mute work in the background of the head as well as Matt's great "behind the beat" alto sax solo later on in the track. Just before that, Watkins says "hello!" with a full high "F" leading to some very nice ideas and a remarkably soft and very quiet double or doodle tongue passage that hooks the listener very well. A brilliant trumpet octave shout chorus finishes the tune out along with some very clean and tasty double-time bone solo passages and a spectacular closing high "G."

In this next selection, Two Colors demonstrates Watkins' appreciation for diversity, in this case featuring the colors of tenor and bone (no other horns on this track) and the style shift from Latin Funk to Salsa styled Latin jazz (possibly a 2/3 clave negro, but check the cascara in the drums and percussion toward the end of the track) following a great Latin percussion solo by Carmello Torres together with Johnson on drums. This is a very exciting track and a terrific one to include on this initial solo recording effort.

Before breaking forth into the final track, StarJive which features the ostinato pattern from Charlie Parker's Star Eyes, Stovall's VP technique, Arlet's guitar, a fairly minimal orchestration (really a jam session) and an atmosphere possibly comparable to the late Sun Ra's famous Hi Ho, Hi Ho presentation (hopefully you've witnessed this live or on television), Watkins offers his penultimate selection, a lovely arrangement for four horn combo of the Thelonious Monk ballad Ask Me Now in a very danceable arrangement, just the way Monk would have liked it. Trumpeter Jamie Moore renders the somewhat disjunct melody nicely and offers some nice cadenza work at the end, but not before Watkins makes his statement with pleasant ideas, phrasing and great facility on yet another impressive double-time passage. The ensemble is fairly tight and the tune lilts along in a very relaxed manner.

Overall, this is a great first effort. Look for much more from this talented group of musicians.

Ordering information and sound clips are available at CDBaby