Melody in A Major: A Review 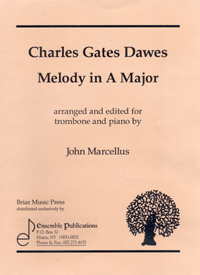 This wistful melody was originally written for violin and found its way into the repertoire of none other than Fritz Kreisler. Of Dawes' work, Kreisler commented "...it has taken my fancy because of its tunefulness and its strong musical value." Brigadier General Dawes (1865-1951) spent time as a member of the Republican Executive Committee during McKinley's presidential campaign and was awarded the Nobel Peace Prize in 1925. He served as vice president under Calvin Coolidge and spent time as ambassador to London during Herbert Hoover's administration.

The tune is a simple ABA form in slow 6/8 time with an eighth note pulse throughout and is 41 measures long. There are several high c-sharps (including the last note) and a number of grace notes to challenge the performer's range and interpretation. In spite of these difficulties, this melody lies quite comfortably on the trombone and Doc Marcellus has transcribed the violin part with skill. There is an optional cadenza, written by the performer, and the piece is available in arrangements for band and chamber orchestra by rental.

This is a beautiful lyrical melody which would fit nicely into a recital program. Larry Zalkind's recent release "Encore" includes an exquisite rendition of this piece.