Trombone con Sazon by The Latin-Jazz Coalition led by Demetrios Kastaris: A Review 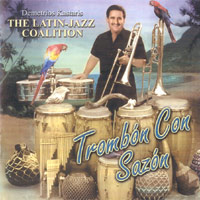 Born in Thessaloniki, Greece, and raised in St. Louis, trombonist Demetrios Kastaris, is a devoted advocate and master of Latin musical idioms. In the seventeen years since Kastaris founded his Latin-Jazz Coalition, "El Griego Rumbero" ("The Greek Rumba Player") and his band have performed regularly in and around New York City. Now, with the help of some stellar guest artists, they have made a most welcomed recording debut with this engaging and excellent CD, Trombón con Sazón (Trombone with Spice).

The title track features the unusual combination of trombone and conch shells, played by Kastaris (on multiple tracks), and the virtuoso flute of guest artist Dave Valentin. From the very first bar of his solo, Kastaris, as he does throughout this recording, exhibits a full, clear tone in all registers, a clean attack, and an ease improvising within the Afro-Cuba idiom. His two-part Midnight in Cartegena Suite opens with a brief "Bolero" rendered in the soothing sonorities of flute and flugelhorn, before easing into "Mambo, Bembé," the same theme with a different rhythmic seasoning, highlighted by a vibrant, confident solo statement by Kastaris.

A musical side trip to Brazil offers up Luiz Bonfá's classic "Samba de Orfeo." Kastaris handles the melody with his rich bass trombone timbre, followed by solos from flutists Valentin and Connie Grossman, Jeff Kruh's synthesized vibes, and the crisp, clean flugelhorn of Brazilian jazz master (and guest artist) Claudio Roditi. Kruh, on piano, and Roditi share the spotlight with Kastaris on "The Nearness of You," a relaxed, after-hours ballad performance capped by a gorgeous trombone cadenza that covers the full range of the horn and climaxes on a stunning high G.

The compelling voice of sonero Hiram Remón is the centerpiece of the nostalgic rumba, "Todos Vuelven," and the old Noro Morales son montuno, "Mariá Cervantes." As this pair of tracks amply illustrates, Kastaris' Latin-Jazz Coalition is not simply a framework for solo blowing - although there is plenty of that on this disc. Rather, this is a well practiced, cohesive ensemble, a musical collective that is greater than the sum of its formidable parts.

Although the trombone is not a part of the normal charanga instrumentation of strings, flute, and percussion, Kastaris effectively adds his horn to this standard mix, creating what he calls a "trombo-charanga-son" with a bi-lingual (Spanish and Greek) lyric, "Son con mi Trombón." Alí Bello's violin solo adds an authentic touch to this variation on the traditional Cuban form. Claudio Roditi returns, this time on trumpet, for "Zina's Zamba," which also features Pete McGuinness' fluid trombone.

Inner Tranquility Suite brings this fine disc to an uplifting conclusion. The first part, "Psalm 92," is an improvised, multi-tracked duet between Kastaris, playing shofar (ram's horn) and shells, in addition to his two trombones, and Valentin, performing on an assortment of wind instruments. This spiritual mood turns spirited in the second part, "Joy and Tranquility," a song of serenity over an Afro-Cuban pulse with solos by Valentin (flute) and Vega (trumpet).

Demetrios Kastaris and the Latin-Jazz Coalition embody the fusion of jazz and Latin musics at its most creative and exhilarating. Peppered with so many musical flavors from the Caribbean and South America., Trombón con Sazón es muy sabroso - very tasty!