Arban Complete Method for Trombone and Euphonium: A Review 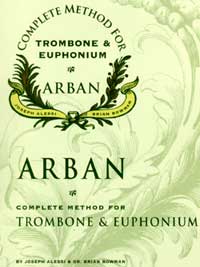 I was introduced to Arban's Famous Method (Complete!) in junior high school by the late Raymond Shenk, Principal Trombone and President of the Ringgold Band in Reading, Pennsylvania and Second Trombone in the Reading Symphony Orchestra. As is, or was, the case with thousands of other young players, Arban was the core of my study. I remain grateful to Mr. Shenk for many things, but primarily for helping me build a base of technical skills at a young age that I can rely on to this day.

In my own teaching, I stress the importance of establishing that fundamental core of technique through daily routine practice in Arban's, combined with other technical etudes and studies. I have, of course, heard many fine teachers and players say "Oh, I never use Arban's--it's so unmusical." These statements, coming as they do from respected members of the profession, have certainly given me pause, but it seems to me that any of this stuff is as musical as you make it. Arban can be played musically, and by the same token Kopprasch, Tyrell, Slama, et al can be played quite un-musically. Obviously, Arban was not Schubert or Brahms (do compare, however, No.13 in Arban's Studies on the Slur with the opening of Brahms' Serenade No.2!), but many of the studies do have a readily identifiable phrase structure that lends itself to elementary study of form and how it relates to musical performance. Further, Arban contains those virtuoso theme and variations solos in the back of the book from which the highly regarded solos of Arthur Pryor, Gardell Simons and others are directly descended.

Obviously, I believe Arban's to be a valuable treasure, if not the crown jewel, in the literature of trombone pedagogy. Imagine, then, my delight in learning of a new, expanded edition of Arban with commentary by Brian Bowman and Joseph Alessi, two of the brightest stars in today's low brass world. As much as I liked the old Arban's, it was definitely in need of some work. The commentary by Simone Mantia and Charles Randall, while often amusing and actually not always that far off the mark, is obviously quite out of date. Carl Fischer, the publisher, did try to update the book somewhat by the addition of commentary by Alan Raph, however Raph's thoughts were merely added and did not supplant those of Mantia and Randall.

In this new edition, published by Encore Music, the comments of Messrs. Alessi and Bowman are presented unencumbered by pre-existing editorial material. Both of these gentlemen bring impeccable credentials to the task, and their comments provide wonderful insights into each of their individual approaches to musical and technical matters. While the book is worth the money for these alone, Encore has made a few other improvements as well. First of all, the format is very clean and readable. All of the well-known misprints and typographical errors of the Carl Fischer edition seem to have been corrected, and while there may be some new ones, I am not aware of them. Suggestions for alternate positions/fingerings have been left out completely which in my view, is an improvement. In the Fischer edition, alternate positions were suggested quite indiscriminately. It seems to me that the newer format allows for judicious recommendations for position/fingering choices by the instructor/coach while eliminating questionable recommendations or non-recommendations in places where an alternate position would be a logical choice.

Encore has included some materials which previously were available only in the trumpet book. These include the Duets (fun!), The Art of Phrasing (short tunes for musical study), and additional theme and variation pieces at the back of the book. Best of all, the book itself is spiral-bound so as to lay flat on the music stand, a most welcome innovation!

Kudos to Encore Music Publishers, and to all those involved with this project. While the concepts and exercises remain essentially unchanged, this new edition is long overdue. Special recognition is due to Mr. Wesley Jacobs, Principal Tuba of the Detroit Symphony and, according to Brian Bowman, publisher of this volume. While the price is a little steep compared to the Carl Fischer edition (which will still do the job, of course), there are, in my view, some substantial improvements to format and readability, not to mention the commentary of Bowman and Alessi that combine to make it definitely worth the extra twelve or thirteen bucks.