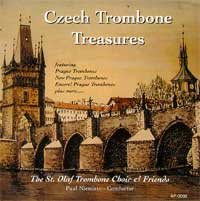 This CD consists of a large number of short pieces for four-part trombone ensemble, as well as two duets, all performed by the trombone choir of St. Olaf's College. The recording covers a wide swathe of musical history, from Medieval times to the nineteenth century. The title is a little misleading. In the first place, one of the pieces, the Concert Duet no. III by Belcke, (track 55) seems to be performed by euphoniums. Secondly, not all the tracks on this recording are by Czech composers. For instance, Belcke was a German trombone virtuoso, born in Lucka, Saxony, in 1795. Still more importantly, almost all of the pieces are arrangements for trombone (mainly by the Wisconsin educator and conductor, Joel Blahnik) of chorales, folksong, fanfares, some songs by Adam Michna, chants, Dvorak adaptations, etc..., rather than original works for trombone.

However, this CD could be a valuable introduction to the sort of music played by Czech trombone choirs, and in particular showcases the contents of Blahnik's three volumes of arrangements of trombone choir music: "Prague Trombones," "New Prague Trombones" and "Encore! Prague Trombones." (All are available from Alliance Publications above.) Such music will be useful for trombone quartets looking for repertoire for church services, outdoor engagements or educational material. The numerous chorales, such as the 'St. Wenceslaus Chorale' (track 3), are especially well-suited to the idiom of the trombone and, on the whole, competently arranged.

The material on this disc would be less useful for a formal concert, which would require at least a few more substantial items in the programme. (Most of the pieces, while interesting, are less than two minutes long - indeed, quite a few are less than a minute's length.) There are a few exceptions, though. I could imagine my own quartet beginning a concert with Kurek's arresting "Royal Procession" (track 19), or the anonymous "Fanfare for Charles IV" (track 1). The seventeenth-century "Jesus Christ Was Born" (track 34) has sufficient musical material in it to interest most listeners - and players.

While the St. Olaf choir's playing suffers from very occasional lapses in balance, tuning and togetherness, this is to be expected in a mammoth recording project by a largely student ensemble. Generally, the ensemble acquits itself well and, occasionally, it does better than that; there are one or two flashes of passion which are especially appropriate in what has obviously been a labour of love for Joel Blahnik, its producer.