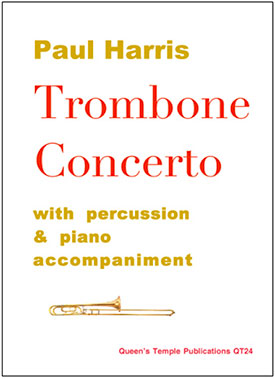 Paul Harris has developed an international reputation as one of the top music educators and composers in the UK. He completed his clarinet performance studies at the Royal Academy of Music with John Davies where he was awarded the August Manns Prize for exceptional performance. He also studied composition with Timothy Baxter and conducting with Maurice Miles. Later, while a student of Professor Keith Swanwick at the University of London, he pursued a degree in music instruction.

This offering from Queen's Temple Publications appears to be Mr. Harris's second publication for trombone along with the "Dental Suite - 16 Studies for Solo Trombone." His musical composition output is vast, mostly focusing on woodwind solo and ensemble works. Fortunately for trombonists, he has ventured into composing for brass and provided a unique and fun concerto in a classical setting with percussion and piano accompaniment.

This contemporary concerto in three short movements is available for purchase through musicroom.com and categorized as a "grade of difficulty" level 8. The grading levels on the musicroom.com website are problematic as there is no standardized scale available and this reviewer could not find other concerti for trombones with a grading difficulty designation. However, given the range (F2-A♭4), technique, and facility required for this composition, a solid high school, and collegiate music major will find this piece obtainable and rewarding.

The first movement, "Invocation for Alexander Lyell," is a moderato selection in common time with timpani, vibraphone, snare drum, cymbals, and tambourine. The trombone enters after a five-measure introduction with a series of triplet diminished F-C-F♯ arpeggios covering two octaves. The accompaniment is sparse, interweaving between tonal centers of C and F in the timpani and vibraphone, and rhythmic sixteen patterns allowing the melody to drive above this unique instrumental medium. The mix of tonal centers and accompaniment is surprisingly pleasing and effectively features the range and tonal colors of the trombone.

Movement two, entitled "Fanfares," begins with pulsating octaves between F and C tonalities (also in common time) in the piano leading the trombone fanfares. The triplet and 32nd note fanfares, which require double tonguing, begin on a mid-range E, modulating to E♭, A♭, G♭, B♭, and E, climbing in range and dynamics up to high G, concluding in a delicate ending in C. The challenge of this movement lies in the range of modulating arpeggios followed by a brief legato scale triplet pattern.

The third and final movement, "Dance," is in a 3/4 meter and begins with the familiar arpeggios alternating between the trombone and piano around the tonal centers F, C, and A♭. This playful movement has multiple meter changes which cleverly move between duple and triple feel enhancing the changes in tonal centers. This movement concludes with a pleasing return to the key of F with a stinger ending on a low F in the trombone.

Overall, Paul Harris has provided a challenging yet pleasing concerto in three movements that will fit nicely in any recital setting. The movements can be performed stand-alone or as a full work, however, be aware that the percussion is only utilized in the first movement while the second movement uses piano accompaniment exclusively. There are orchestral parts available from the publisher but for the purpose of the review, only a piano reduction with percussion was provided.

A singular criticism of this wonderful addition to the trombone repertoire is that the music leaves the performer, and perhaps the listener, wanting more as the duration is less than ten minutes. Creating and maintaining momentum may be difficult when performing this piece since each movement stops before it has had a chance to fully develop. Perhaps this selection fits in well as a recital opener or a fun closer to the first half of a performance. Regardless of the setting, it is recommended that young trombonists everywhere explore this contemporary piece.