Concertino in F for Bass Trombone and Piano by Ernst-Thilo Kalke: A Review 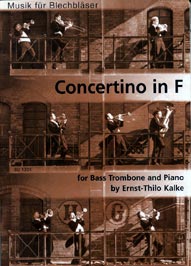 Kalke's Concertino in F opens with the piano very clearly establishing the tonality, F: I-V7-IV-I. The composer expands from that conventional cadential formula to work with expanded tonal harmonies typical of the late 20th century. Ears attuned to common practice harmony would be scandalized: the piece ends in g, with a raised third in final plagal cadence, which I take as homage to 18th century practice. However, most works of the 20th century would scandalize ears tuned to common practice harmonies. The structure of the piece follows the form of a miniature classical concerto. It opens with a vigorous allegro, which uses some compound meter. The dialog slows into a cadenza for the bass trombone, accompanied in one section. A slow section (mm=80) follows the cadenza. This accelerates into a closing fast section. In this section 4/4 bars are often really 8/8, subdivided 3+3+2.

The demands placed on the soloist require facile technique. Kalke is clearly writing for a double-valve instrument. An independent valve instrument will simplify several passages, but everything written is playable on an instrument with stacked valves. The range requirements are reasonable: G1 to G4, no trigger pedal tricks are necessary. The writing lies well on the instrument.

The engraving is excellent; both parts are very easily read and printed on heavy stock. I have only two minor gripes about the work. Some of the compound meter writing is awkwardly notated: a 4/4 bar followed by a 5/4 bar in subdivided threes would be better notated as one 9/4 bar, for example. The second problem is the composer's jumping from Italian tempo descriptors to metronome markings and back. He usually only gives one or other, I would prefer both.

The publisher does not provide a grade for the piece. I would say that it is rather more difficult than Lieb's Concertino Basso in both parts, and probably comparable to Gordon Jacob's Cameos, although of a completely different musical genre. It is suited to a good college player, or perhaps a very mature high school bass trombonist. In my opinion, it represents a welcome addition to the solo repertoire for the bass trombone.