Harlequin for Bass Trombone and Piano: A Review 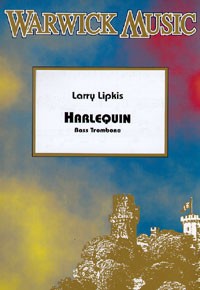 This is a substantive virtuoso work that will challenge performers and audiences alike. Commissioned in 1997 by the Los Angeles Philharmonic for bass trombonist Jeff Reynolds, this work is now available in a piano reduction. Harlequin is an atonal one-movement work consisting largely of dramatic gestures and frequent contrasts. The difficulty of the solo part lies largely in the execution of rapid wide leaps throughout a range from double pedal A-flat to high B-flat. High G's and A's appear often, sometimes approached by wide leaps. Shifting rhythms and complex meters will require performers to stay on their toes. Although the piano reduction does not present anything ridiculously difficult, don't attempt this work unless you have a strong pianist willing seriously prepare their part.

You won't find long, lyrical phrases in this work. Most of the solo part consists of short gestures. Lipkis' compositional style is sophisticated and uncompromising. I fear that many audiences will be left scratching their heads and politely applauding even after a fabulous performance.

Harlequin's greatest curiosity is its unusual cadenza which calls for a dialogue between the bass trombone soloist and a musical saw. At one point in Lipkis' cadenza, he calls for a "thirty-second dialogue with the saw." In fact, Warwick's edition includes a second cadenza composed by Jeff Reynolds (as premiered by Reynolds and saw performer David Weiss) to be used at this point in the score.

Curious about the inclusion of a musical saw, I corresponded briefly with Lipkis and received this response, "...I had known about David Weiss and his saw playing for many years; I frequently used his recording in my Orchestration class. So I asked Jeff Reynolds whether David still played, and he thought he did, so I went ahead and called him up and he agreed to play it in the concerto. We chatted for a bit, then I met with him when I was next in LA and he gave me a saw demo could do, which was quite revelatory. Compositionally, I conceived of the saw part as a kind of counter-ego to the bass trombone - an ethereal, heavenly voice trying to lure Harlequin to become, well, less of a roque. I know that many orchestras do not have access to saw players. David has said he would be happy to be a guest soloist if he could work it into his schedule. Otherwise, the part could be played by an offstage synthesizer."

This edition by Warwick is basically solid but seems to contain a number of sloppy minor errors. In m. 23, position indications for a "across-the-grain" glissando have been omitted from the solo part (although they do appear in the piano score). An accent is sloppily placed in m. 134. Measure 170 in the score indicates an optional tacet for the soloist but this information does not appear in the solo part. In m. 245, the "saw" dialogue has an appendix reference in the score but not in the solo part.

These details aside, my greatest frustration with Warwick's edition is the complete lack of program or performance notes. Considering the complexities of this work and Lipkis' own allusions to programmatic content, the fact that Warwick hasn't bothered to include explanatory notes is inexcusable.

If you are in the mood for a real challenge, this work will offer plenty of them, both technically and musically.