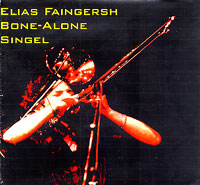 Swedish trombonist, composer, and performing artist Elias Faingersh has produced a recording of his own compositions for solo trombone pulling from his life experiences and electric machinery that expands the ears and challenges the mind. This is especially impressive since all of the selections on this CD were recorded live in a studio without any overdubs.

Hailing from Malmoe, Sweden, Elias studied undergraduate trombone at the Malmoe College of Music with Anders Hansson and Jane Martensson. He then pursued his graduate degree at the Manhattan School of Music School while studying with Per Brevig. Currently Mr. Faingersh's time is split between performing solo concerts and writing music for theater shows.

The opening selection on this CD, Steitl Bone, is for unaccompanied trombone and was written in honor of his grandparents wedding. The 60-year-old story behind this piece goes like this: At the time of their wedding they were very poor and couldn't afford to hire a band, but had just enough money for one trumpet player who played for some 16 hours during the celebration! Elias doesn't perform for that duration but does present a fun, danceable piece based on traditional Jewish folk music that uses an amazing multitude of circular breathing, flutter tonguing, singing, multi-phonics and yelling. With all of the different sounds and effects produced in this piece the listener can simply sit back and imagine the wedding through this amazing performance.

The next four selections on this recording use electronic equipment. Wanting to know how this music is possible without any overdubbing, I contacted Elias for an explanation. On the record he uses a Lexicon MPX 100 effect processor and Lexicon "Jamman" loop machine. A signal from the trombone microphone goes into the effect processor, which can produce echoes, delays, and other changes. It then goes into a loop machine, which makes a loop from any incoming sounds (trombone or singing). He operates the equipment from the floor using MIDI foot controllers. It must be a sight to see because the pulsing rhythms and constantly changing timbres are amazing.

Elias Faingersh is obviously a talented and creative trombonist who has explored his own musical personality to produce these compositions. This CD is not the typical recording of mainstream trombone music. It is quite unique and may not be appreciated by all listeners, however this reviewer enjoyed it more with each listening. Perhaps the full effect of Mr. Faingersh's performance would be best realized at one of his live concerts. Based on this recording, if he is playing in your area, don't miss it.