Masterclass with Benny Powell: Presentation And Programming Tips For Trombonists 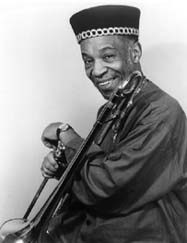 This article was written by Bob Bernotes, as told to him by Benny Powell.

Traditionally, we trombonists have been stepchildren. In a big band, when the trumpet player finishes playing then the tenor player plays and after that comes the drum solo. And in the meantime, the trombone player maybe has had eight bars in the whole arrangement. For example, the thing I am most remembered for was the little melody that I played in the bridge to "April in Paris" with Count Basie. That's why we all have to eventually leave big bands if we want to be soloists, because traditionally, we just don't get enough chances to play.

But the trombone has a particular problem because the sound of the instrument can put the listener to sleep. When you get ready to program either a performance or a recording you have to take into consideration how long the trombone can hold people's interest.

I've found that if you have to play three or four sets with a trombone and a rhythm section, relying on the same format--an introduction, then you play the head and then blow on it, everybody takes solos, and then you take the head out--it will work for a couple of tunes. After a while, the sameness combined with the mellow sound can allow the listener's attention to wander. It becomes background because, for the most part, it's a pleasant sound, as opposed to something more harsh or shrill that keeps the audience on its toes.

It seems like a lot of music today goes off high energy. Well, it's hard to attain that on trombone, the way that it's built. Trumpets and saxophones have valves or keys that allow the musician to play fast and use many, many notes, but on trombone, you have to think in other ways and have to be a little more creative. You have to give the listeners constant surprises. Just when they're about to lull off, give them something to perk up their ears.

Here's one of the simplest examples that I use. I play the ballad, "But Beautiful," but to make it more interesting, I borrowed an introduction from another song, "You'd Better Go Now." It's just a four-bar introduction, but it's enough to make the audience think that's the tune I'm going to play. Then when I go into "But Beautiful," it's a surprise for them. So I've got them for five more minutes. In the next five minutes, I've got to come up with something different again.

Normally I use a change of pace. If I open with one fast tune, my next tune would perhaps be in the Latin vein, a bossa nova or something. The third tune might be a ballad. I try to mix it up--make each one a bit different from the preceding one. I hate to put this on younger, inexperienced players, but you'll hear them playing a tune, and it might be something fast and kind of furious. You can go outside and get a hot dog and come back and if they're playing another fast tune, it sounds like the same thing.

The change of pace is, I think, very important for all musicians, but it's especially important if you're a trombone player. You can exhaust yourself early in the set, playing trombone, if you don't pace yourself and if you try to play a lot of notes. Physically, the horn wasn't built for that, and those few guys who do play fast have spent many years practicing it--guys like Curtis Fuller, Slide Hampton, Steve Turre. But because I don't play that fast I have to do something else to make it interesting. I usually hold the fast tunes for the end of the set because it makes good closing sense and you won't tire yourself early.

Also in terms of programming, trombonists have to be a little more creative. There are many colors that you can use to create a varied presentation and hold the audience's attention. Dick Griffin uses multi-phonics, that's part of his palette. Al Grey uses the plunger, that's part of his palette. I use both multi-phonics and the plunger. As a matter of fact, the only tune that I feel I can do totally by myself, without rhythm accompaniment, is one I use multi-phonics on, "Come Sunday." It allows another voice to come in, and if you spot it just right it can be very effective.

I've also been working with acoustic experiments--when to use the microphone and when not to use it. One of the most fascinating things that I've encountered, so far as sound is concerned, happened when I went to Japan in 1989. Tony Bennett was on the bill and I noticed that, no matter how large the hall was, at one point he'd walk completely away from the microphone and just sing into the hall.

If the microphone is properly attuned, trombone has a nice, mellow sound. But many times the sound is distorted, because the people that are setting up the sound system normally do it for rock and roll groups, and trombones don't figure in that at all. It's a soft and mellow instrument, but the people who set up the systems are geared for sounds that are more piercing. That's something else trombone players have to be concerned with more than saxophone or trumpet players.

The same is true in recording. Trombones often don't sound the same as they do live, and for the most part it's the engineer's fault. Engineers deal more with trumpets and saxophones--more piercing instruments--and when a trombone comes on the scene, it might be the first time that the engineer has had to work with one. What they do is look at needles, rather than use their own ears. The needle may be registering what he was taught is a good level, but for the sound of the trombone that isn't necessarily so. You can get the trombone sounding very flat, with no life, so I look for engineers who are attuned to the sound of the trombone.

I'm not an engineer and I don't have that much technical expertise, so I can't really tell them specifically what to do, but I can say that I would like a little more reverb on a particular passage, or I want a warmer sound, and usually they relate to that. They'll try different things. They'll ask you if that's what you want. That's why you should listen to playbacks. You do yourself a disservice if you don't.

I recorded and produced my own album, Why Don't You Say "Yes," Sometime?! (Inspire Productions). From the experiences that I've had in the studio, making a recording is, for me, the ultimate programming. You set out the program and then you have to leave it alone. Once the record is released, you can't go back and recall all the issues and say, "No, I think I'd like this tune to follow the other tune." So you have the same problem as in a live performance--the listener has to hear a trombone being featured for the better part of an hour. But in this case, it's permanent.

I tried to use another vehicle that was at my disposal, and that was multi-tracking trombones. Now as I said, trombones are limited in some respects, but if you find out what they're good at, you can use that. And they're excellent at providing a choir as a mellow background. It's a warm blanket, a cushion, and you can lay anything on it. This is what I discovered and I used it quite a bit.

In other words, what I did was keep giving the listener something fresh--surprises. That's the theory behind all of this.