On Friday, March 24, 2000, the trombone world--make that the entire music world-- lost one of its all-time greats, my friend, Al Grey.

How many memorable solos did Al Grey take with the Basie band during its heyday in the 1950s? There was "Makin' Whoopee," "A Little Tempo, Please," "Segue in C," "Half Moon Street," I Needs to Be Bee'd With," that gorgeous soli chorus with his trombone voiced over the sax section on Thad Jones' "H.R.H.," and on and on.

Do you know that recording from early 1957, "Dizzy Atmosphere," that featured seven members of Dizzy Gillespie's big band? Among its many highlights are Al's rip-roaring, breathtaking, chorus-after-chorus ride through the fast blues, "Dishwater," and his soulful ballad feature, "Day By Day." This session is now listed in the Fantasy Records catalog under "Lee Morgan, Wynton Kelly, et al.," but when it first came out, Al and tenor saxophonist Billy Mitchell were the actual co-leaders. This also was the first-ever recording of Benny Golson's "Whisper Not." The last time I saw Al I mentioned this record and he proudly pointed out these two facts to me.

That final encounter with Al took place last December 17 at Sweet Basil here in New York, where he was guesting with Steve Turre's group. He looked a bit frail and took only brief solos--just a couple of choruses on each tune-- but he played strongly and magnificently. In fact, the necessary brevity of his solos only enhanced Al's wonderful sense of form and his ability to, as Basie instructed him more than four decades ago, "tell a story." And during the breaks, as he greeted well-wishers, Al was his usual garrulous, ebullient self.

I could tell Al Grey stories until late next week, but for now, let me just say that I never saw Al Grey on a bandstand or a stage when he wasn't smiling. And I never saw an audience that Al Grey didn't cause to smile. He was a true communicator, and there aren't many of those around these days. Al, you will be missed! 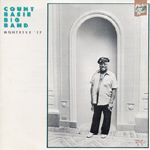 The following excerpts of Al Grey are from the album "Count Basie Big Band at Montreaux '77" OJCCD-337.