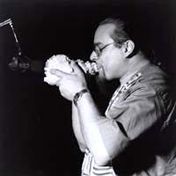 "When I was a teenager, I used to play with Rahsaan Roland Kirk whenever he would come through San Francisco. Every time he'd have something different, a nose flute or the black mystery pipe or whatever. One time he had a conch shell. He just blew one note on it while he was banging a gong, like a call, but the sound was so beautiful it made me tingle. So I blew a note on it and said, "Man, that's it! I'm getting one of these!" Over the years I kept developing it and correcting it, and collecting more shells of various sizes and pitches."

I just love the sound. I wish I could make my trombone sound like a shell, in terms of the resonance. I mean, the shells sound just as full standing behind or on the side as they do in front. Dexter Gordon had that kind of sound on the tenor saxophone.

Generally, I buy my shells in stores. It's very important that you get a shell that's a perfect specimen. It should come to a perfect point, more or less. If you find one on the beach and it's been beaten up by the water and the wind and the sun, chances are it's no good. And a lot of times you'll find a shell where someone's knocked a hole in it to get the meat out. A shell with a hole is no good.

Now you have to make a "mouthpiece." Cut the point of the shell with a hacksaw, approximating the size of the inside rim of your mouthpiece, depending on whether you play trumpet or trombone. For a trumpet mouthpiece, cut it closer to the point, because it's smaller. For a trombone mouthpiece, come down a little to where the shell gets bigger. Remember to cut it slightly small, because if you want to adjust it you can always sliver off a little more to make it bigger. If you cut it too big, you've got to start all over again with a new shell.

Inside the shell there is a center core that you have to knock out. Take a screwdriver or a small chisel and a light hammer. Don't hit it too hard, but if you tap it, it will break off. Then you can file the rest down. I use a little hand-held grinder called a Dremel.

After you get the approximate size of your mouthpiece, take a medium-fine file and file it to get all the saw marks out. Then take an extra-fine file and file it down again, and round the edges a little bit. Then put a piece of extra-fine sandpaper in the palm of your hand, put the nose of the shell with the mouthpiece into it and turn it back and forth. The paper will conform to the shell and you can smooth it out even more.

If you really want to smooth it out, you can take pumice on a rag and do that again. You could play a shell without doing all this, but you're going to hard pressed to play anything else after it because it's going to tear your lip up, which is the problem I had in the beginning.

Sometimes shells have irregularities in them, or the shell might grow real thin at a certain point. When they're too thin to approximate the rim of the mouthpiece I use the plastic material that they make dentures from to build up the outside of the shell, so it will be thick enough to make a rim. I leave the inside of the shell natural, so my lip is actually touching the shell, but this way I have a little bit of cushion. If you try to play and the rim of the natural shell is only a sixteenth of an inch, man, it just tears you up. It's not sharp, but it's too small.

OK, you've got an instrument, now how do you play it? You produce the sound with your lips, the same as a brass instrument. Control and change the pitches with your embouchure and with your hand inside the shell. With the bigger shells, you don't get much range, maybe a third, sometimes a fourth. On some smaller shells I can get as much as a sixth. You also can get overtones, generally just the octave, but on some of the larger ones you can get more than an octave.

When you play the shell, you work down from the open note. That's the principal tone. As you put your hand in, it gets lower. The principal should be a note that's in the key of the tune you're playing, preferably a strong note, like the fifth or the root--or the seventh, if it's a blues.

Some of my shells are "in the cracks," in terms of what the piano intonation is. You can play almost any shell, but when you cut them and play them, some of them are really much, much better than others. So if you get one that's really great, even if it's in the cracks--let's say, you get one that's between a Bb and an A--well, I know where the pitch is when I'm going to blow it. So if I want to play an A, I put my hand in there just a tiny bit. If I want to play a Bb, I'll lip it up a little bit, and start from there. You just have to know what the pitch is and get to know each instrument as an individual and deal with it from there.

I have a set of shells that I use when I play from the key of C into the sharp keys and I have another set that I use to play the flat keys. In the sharp keys, the open note is E or B or D, etc., and the ones in the flat keys are Bb, Ab, F, etc. Then I can blow two shells at once and play harmony.

You can't play Giant Steps on the shell. I think the most harmonically complex thing I can play is the blues, and it's really best on modal or vamp tunes, like in Latin music. But if you can tell a story using rhythmic concepts and simple melody, it's very effective. Also, I have to leave space in my solos, because if I'm playing in one register, and I want to go to the other register, I need time to pick one shell up and put the other one down.

Playing the shells can help you as a brass player. They take a lot of endurance, a lot more air and strength. As a rule, after I've played the shells, playing the trombone is, physically, a little easier. Also, in terms of building a solo, once you can tell a story in just the interval of a fourth, you see that it's not necessarily about how many notes you play. It's about what you're saying. So playing the shells really helps you conceptually, because if you can play simple, then when you do play complex, it will mean something.