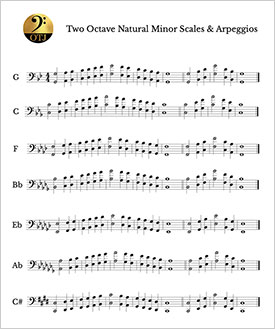 Your experience in major keys means you already know the natural minor counterparts. Below is the B♭ major and G natural minor scales and arpeggios. Notice that these have the same key signature all the same pitches, they just begin on different places in the scale. The relative minor scale will always begin on the sixth note (or scale degree) of its relative major scale. In this case, the sixth scale degree of B♭ major is G. The relative minor scale of B♭ major would begin and end on the pitch G, and use the key signature of B♭ major.

We can say that G minor (the scale and the key) is the relative minor of B♭ major. This is the primary way we think about the relationship between major and minor keys.

The second way we can talk about the relationship between major and minor is when the starting pitch is the same for both, but then key signature has to change. We can call this a parallel relationship. For example: B♭ major and B♭ minor both begin on B♭, but the two scales will have different key signatures so that the scales sound differently, even though they both begin on B♭. B♭ minor is the parallel minor to B♭ major. To make a major scale into a minor scale, add three flats to the key signature. You can also think about lowering the third, sixth and seventh scale degrees one half step.

However you think about the relationship of major and minor scales, there are some important practice thoughts to keep in mind as you learn this new scale form.

Finally, for those wanting to dive deeper into music theory, MusicTheory.net has well-paced and effective lessons and exercises on major scales, minor scales, scale degrees, and key signatures. The more you know about the language of music the more fluent you will be in performing! These are especially recommended for those seeking to pursue a music major in college and/or a professional career in music.