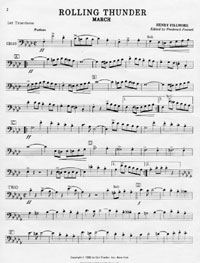 It was the night before my first big concert with a high school state honor band and I was in a panic! How am I going to learn how to play something that was beyond my immediate technical ability?

The object of my fear was Fillmore's Rolling Thunder, a very fast circus march with several challenging double tongue passages. By that stage of my development as a trombone player, I had really just begun to learn the art of double tonguing, and that night the demands of this piece were WAY beyond me. At a rehearsal earlier that day, I had felt intimidated by how the other players in the section had whipped through the piece, slides flying around like mad. Humility can be a great source of inspiration! I was determined to figure out how to get Rolling Thunder up and running to the point that I would not be a detriment to the section on this piece!

Where was I going to start? In the midst of this panic, a very basic concept dawned on me (or maybe someone had actually told me this before, but it did not make sense until this moment!?). Trombone playing consists of three technical elements that must work together: blowing/buzzing of the lips (sound and flexibility), the slide (digital coordination) and the tongue (articulation and rhythm). Before trying to make these three things work at once, I decided to build them up one at a time.

Concentrate on Blowing/Buzzing The Right Notes. This is the most fundamental step. Without hearing and buzzing the right notes and being on the correct partial, you have no hope of playing a passage, no matter how fast or slow the piece. Fortunately, the range of this piece was not too extreme. The melody is built mostly in scale shapes and there are not many wide intervals. In other words, I could play every note on its own or slur to and from any note without much trouble.

Concentrate on Moving the Slide. Moving the slide at a fast tempo like this is more of a challenge. But if I could at least buzz my lips and get my slide moving together near the right tempo, I would be able to approximate what it would feel like to finally articulate it cleanly. This is what I set out to do: move the slide and buzz the right notes to make sure that these first two elements lined up, with a little practice.

Although quite slowly at first, I was able to "slur and smear" through the difficult eighth note passages, coordinating the lips and the slide without any tongue but in time. Eventually, I continued with this process up to the point where I could blow the notes and move my slide up to tempo. Throughout this stage of the game, I emphasized keeping the air and slide in motion even though it didn't sound right yet with all those glisses between most of the notes (roper slide technique could be the topic of another article, but basically strive for a fast, yet un-jerky slide that does not move the horn around on your face).

Concentrate on Adding Enough Tongue. Adding the tongue came together pretty quickly after I worked through the first two steps outlined above. Now that my lips and slide were lined up in synch, I just needed to add enough articulation to make it presentable (in this case, I found "tuh kuh" an effective articulation). Another light bulb went off in myhead! Just add enough tongue to a phrase to get rid of unnecessary smears instead of thinking of the tongue as the initiator of each note. The tongue just provides a little "tip" to a constant moving slide and airstream. This works for all forms of tonguing; single, triple, double, doodle, etc.

Over the years, I have found this three step process an effective way to work out other musical/technical demands: fast and slow legato phrases, wide intervals, tricky passages in the extreme upper and/or lower registers, dynamic extremes, etc. This process is equally useful for developing single, triple and doodle tonguing too. Isolate the first step (buzz/blow any note), then add the second step (move the slide between note gradually up to tempo), then add the third step last (your articulation of choice) . I have since used the three step process for learning everything from fast "bebop" heads like "Donna Lee" and "Confirmation" to Bordogni etudes and jazz ballads to orchestral excerpts like Rossini's WilliamTell and Berlioz's Hungarian March.

You can also use the three step process for developing clarity in detached single toungue styles too, using air attacks ("hah") on each note in the second step. Then, in the third step, you can add enough tongue to make each note "ping." Putting the articulation into the mix last helps keep the tongue from becoming too heavy or prominent. As Arnold Jacobs liked to say, "Think tAH, not Tah."

Adding the tongue last also seems to reduce excess tension in the tongue. Less excess tension will allow you to concentrate more on the music. Learn to add just enough tongue to make a given passage musically pleasing.

The three step process outlined here has helped me "get over a hump" then time was of the essence. With any technical skill, however, I have learned to work on it slowly and practice regularly (be it multiple tonguing, doodle tonguing, legato, staccato tonguing).Practicing something slowly, deliberately and correctly (then start increasing tempo) is the best time-proven way to develop consistent and reliable technique.

Download: PDF of the first trombone part of Rolling Thunder. This part is made available by Carl Fisher publishing company.

Download: MP3 of Henry Fillmore's Rolling Thunder as performed by the Eastman Wind Ensemble, Frederick Fennell conducting. This recording is from a rerelease by Phillips Classics of the Mercury Living Presence recording done in 1962 and 1957. The recording is available at Amazon.Com.