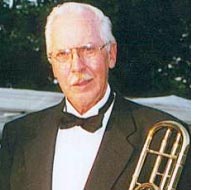 After a battle with pancreatic cancer, John Hill, distinguished Professor Emeritus of Trombone at The University of Iowa, passed away at his home in Iowa City on March 18, 2001. John had served Iowa for 36 years in the trombone studio, and more recently, as Associate Director of the School of Music from 1980-96. His retirement from the university was marked in 1999 by the John Hill Tribute Trombone Workshop, attended by scores of his former students, friends, and colleagues. The workshop was graciously organized by Dr. David Gier, Associate Professor of Trombone at Iowa.

John's distinguished career in performance began in his teens, with extra/sub work with the Detroit Symphony, on the recommendation of his teacher, Bob Jones. At the age of 19, he was appointed a member of the trombone section as a utility player and also handled tenor tuba and bass trumpet parts. While still in Detroit, he won the position of Assistant Principal Trombone in the Leonard B. Smith Concert Band, and based on John's performance in his band, Smith wrote letters of introduction to both Gordon Pulis and Simone Mantia. His studies with Pulis in New York led to a contract offer from the New York Philharmonic to assume the newly-created position of Assistant Principal Trombone, but the Korean Conflict put stripes on his sleeve instead, as a member of The United States Air Force Band in Washington, D.C., under the command of Col. George Howard. After his discharge, John entered the MM program at Indiana and the year of his graduation landed a position with the Baltimore Symphony, but the lure of teaching proved too hard to resist, and he accepted an offer from The University of Kansas to take over the trombone studio there, simultaneously earning his Ph.D. in Music Education. In John's seventh year at KU, Himie Voxman, Director of the University of Iowa School of Music, invited John to the Iowa faculty in 1963. John was a founding member of The Iowa Brass Quintet, which made numerous recordings during his tenure with the ensemble, and he also served as principal Trombone with the Quad-Cities Symphony Orchestra.

In a fitting tribute to John Hill's distinguished career in trombone teaching and performance, and in recognition of his contributions to the profession, he has been named recipient of the 2001 International Trombone Association Neill Humfeld Award for Excellence in Trombone Teaching, and his family is pleased that he was notified of his award while he was still able to appreciate it. An article on John's life and career will appear in the Summer, 2001 issue of the International Trombone Association Journal. John was a lifelong and ardent supporter of the ITA and served two terms on its Board of Advisors; he was also a member of the International Trombone Workshop faculty when it was held in Nashville in 1980.