Masterclass with Conrad Herwig: An Introduction to Doodle Tonguing

This article was written by Bob Bernotes, as told to him by Conrad Herwig. 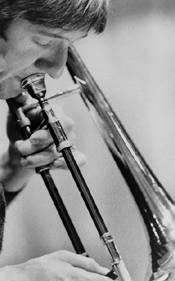 When I was, say, 13 or 14, sax players would count off tunes and I would be frustrated because I couldn't play that fast. I would say, "Man, I'm gonna get to the point where I'm gonna call the tempos." Doodle tonguing allows the trombone to compete on that level.

In double tonguing, the dominant sounds are "t" or "d," and the rebound, or passive, sounds are "g" or "k"--"tuh-kuh-tuh-kuh," or "duh-guh-duh-guh." If you're playing classical music or get called for a studio date, you have to have double tonguing in your arsenal.

But it's kind of stiff and doesn't lend itself to jazz. You hear guys who might be playing pretty smooth, but then they go into double-time and it isn't in context. Doodling allows your double-time ideas to flow smoothly and naturally out of your single-time ideas. And it really does lend itself to swinging.

You can practice this by continually saying each "da-dle," dee-dle," etc., four times in turn. I call it my "doodle tonguing mantra." This is a great way to utilize your time away from the horn. When I was a kid, I used to ride the bus an hour each way to school and I did this every day. Of course when we play, we're not articulating the syllables with the vocal chords. It's almost like a whisper. But this exercise helps the tongue become flexible.

For practicing doodle tonguing on the horn, Arban's is a really great book. A lot of the exercises that I used to start doodle tonguing were the same ones on which I practiced single and double tonguing. Start slowly, just five minutes a day, because you'll find that your neck and your tongue are not used to it and you can get overtired. You can actually become muscle-bound, at first.

Also, some people can doodle very fast, sort of like flutter tonguing, but control is a problem. If you can do it really fast, practice with a metronome and slow it down.

One other important key is to keep practicing your single tonguing. As fast as you can single tongue, you can doodle tongue twice as fast.

So you must be able to switch back and forth. In certain types of ideas, the tongue is there only for reinforcement--for instance, diatonic passages. But when you're playing chromatically, the tongue really becomes important. Chromatic patterns need the influence of the tongue.

Although you're practicing the "a-e-i-o-u" vowel pattern, when you solo you actually mix and select among the "deedles" and the "doodles," like in scat singing. It's an intuitive thing, and it has a lot to do with to the harmonic series of the horn. In the low register, the "o" helps you enhance your sound, because you're using a larger cavity in the throat. As you get into the middle register, the "a" sound is sort of in between. The "e" sound concentrates and focuses the air stream more for the upper register.

Doodle tonguing, like any technique, will enable you and give you freedom, and that's all we want, control--what I call "freedom through discipline." I tell students, "Man, if you practice this doodle tonguing for a couple of years and get into to it, there's gonna be a time when you'll be up on stage laughing and smiling, playing tempos, playing everything, whereas now, you're worried, `Is this guy gonna count off a tempo that's too fast?'" It's a tool that enables you to put the music first.

If your musical ideas have a life and a validity on their own, it doesn't matter if you're using single, double, doodle or some combination of them. My real goal, ultimately, is to develop a "multiple tonguing system," a system for technical flexibility and facility that utilizes all the available tonguing techniques.

In music today, you don't want to be limited to just one area, at least I don't. You can stick to one system, like tunnel vision, but if we're looking ahead to the future--to what I call "twenty-first century trombone playing"--what we really need is an all-inclusive system, and doodle tonguing is a key element of that.